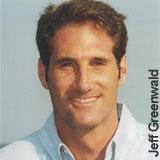 As a Sports Psychology Consultant: Jeff holds a Master's Degree in clinical psychology, with a specialization in sports psychology. He has conducted one-on-one performance enhancement sessions and interactive group workshops with athletes in tennis, baseball, soccer, golf, gymnastics and basketball; with college and recreational athletic teams and leagues; with highly competitive juniors in the U.S. and abroad; and with adult tennis enthusiasts who want to perform at a higher level. His seminar hosts in the sports world have ranged from tennis, golf and fitness club owners and directors; to college coaches; to league captains; to parents seeking guidance on relating effectively to student athletes.